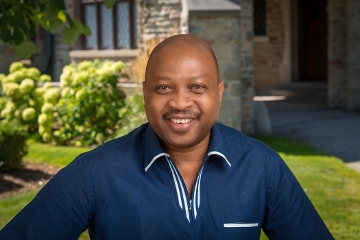 A former journalist and columnist with Sunday Times, Concord, and New Age newspapers in Nigeria, Akin was an activist within the African diaspora community in Windsor, Ontario, before moving to London. As an Associate Editor of the now defunct local magazine, Sankofa News, he challenged anti-Black racism, poverty, inequality, and other oppressions and injustices against vulnerable and marginalized populations.

As a registered social worker, Akin engaged in direct practice with individuals, families and groups in the community, and did some administrative work for the hospital. He was also an adjunct professor both at the University of Windsor, ON, and the University of Detroit Mercy, USA. More recently (2017-2019), he was the Academic Director of YouthREX (Youth Research & Evaluation Exchange) for the Windsor-Essex Community Hub.

Taiwo, A. (2019). Can social workers shatter the pyramid of privilege?: Going beyond the rhetoric of social justice. Paper presented at the Global Partnership for Transformative Social Work gathering, Sarum College, Salisbury, England. April 27, 2019.

Taiwo, A. (2018). When reflection is not a priority: Report from a phenomenological study. Paper presented at the Global Partnership for Transformative Social Work gathering, Bishop Booth Conference Centre, Burlington, Vermont, USA. October 13, 2018.

Taiwo, A. (2017). The crisis of representation in qualitative research: The case of a Latino male social worker. Paper presented at the Canadian Association of Social Work Education (CASWE). Ryerson University, May 30, 2017.

Taiwo, A & Archer-Kuhn, B. (2015).  Checking ourselves at the door: Expanding ideas of bracketing in phenomenology. Paper presented at the Canadian Association of Social Work Education (CASWE). University of Ottawa, ON, June 2, 2015.

Taiwo, A. (2013). “I’ve earned this privilege by sweat”: A racialized male social worker explores professional privilege and its uses. Paper presented at the Pedagogy of Privilege, University of Denver, Colorado, U.S.A., August 5, 2013.